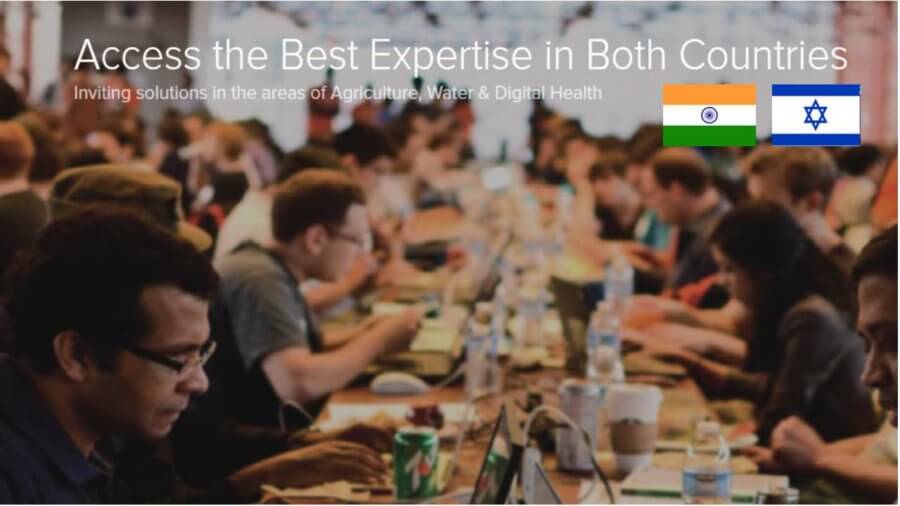 How can you benefit from India-Israel cooperation in startups?

Israel Invites collaboration between Indian and Israel startups as a part of the forum more than 10 agreements were signed between the countries.

the biggest one being a trilateral fund for US, India and Israel worth $50 Mn which was launched by Israel-India Technology Group.

Indo-Israel cooperation in startups: An overview

The startup ecosystem in both India and Israel is buzzing with activity over the last few years. As per a report by NASSCOM (NASSCOM – Zinnov Report), the number of startups in India has gone beyond 5000, with more than 1000 added in 2017 alone. They enjoy a market valuation of more than $32Billion. The first half of 2017 saw a funding of more than $6Billion. Robotics, Analytics, Education, Health and Finance remained the most popular segments, and several social sectors like Clean Energy and Agriculture also rose to prominence. In comparison, Israel had more than 4000 startups by the end of 2016, and they had raised more than $5Billion in 2016. In traditional trade, India and Israel have a long history of cooperation, as the chart below shows. 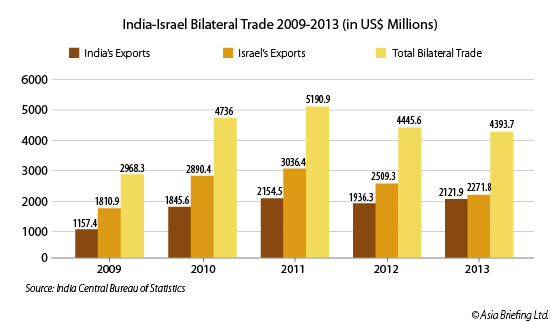 The volume of trade was more than $4 Biluntil until the end of 2016. But that camaraderie has rubbed off on the startup scene as well. The India-Israel Innovation Fund was set up in 2017, which saw deals worth $5Billion being signed. In September 2017, the India Israel Innovation Bridge was also launched, with an aim to invite startup proposals and provide incubation to those selected.

Technologies and sectors that are most interesting between India and Israel

Indo-Israel co-operation has caused positive changes and resulted in growth in several industries. Listed below are the technologies and sectors that hold the potential for mutual benefit for India and Israel.

Since 1999 military interactions between these two countries have developed very positively, one of the reasons being that both the countries have a long history of terror attacks. The two nations have seen up to $9Billion in defence trade as far back as 2009. This cooperation has seen the two countries get a joint military exercise, terror groups’ insight and intelligence details sharing. Ever since Indo- Israel cooperation was established there have been more than 50 military-related visits and consultations between them.

In 2017 Prime Minister Modi visited Israel and signed an MOU worth $40 million which was meant for India-Israel Industrial research and development, of which half would be contributed by each country. This will be a massive breakthrough for most start-ups in both nations since with that there will naturally be technology due to the availability of research funds between the two countries.

On top of that two technology gurus of the two countries were brought together by a bilateral MOU signed to support innovation- The companies are Zebra Medical vision and Telerad Tech. The two companies partnered to work on more research on the health sector which in this case was an in-depth study on analytics engine that would greatly help the health sector. Telerad partnered with Zebra medical vision since they were able to produce and deploy AI for radiology which would greatly benefit all startups and health care centres within Asia and Africa.

How do startups benefit from Indo-Israel cooperation?

India is the most significant single market for any product or service outside China. Whether it is an Amazon or a Coca-Cola, they need to do well in India to get big profits, because the sheer size of the Indian market is daunting. Added to that is the frenetic activity in India in the technology space. When you take this bubbling market of India and bring it together with a country like Israel, which is one the leading startup countries, then good things are bound to happen.

The interaction between India and Israel will benefit entrepreneurs intending to venture into the two countries. Startups have a considerable advantage whenever two nations become allies. Startups will get an advantage of moving around comfortably for forums and seminars with no tight restrictions.

In a situation whereby countries co-operate this advantage always comes to be where people do not require loads of paperwork and tight restriction to move around nations.

The visa analysis below indicates the rate at which travel visas have been acquired for travelling between both countries, and it’s quite evident that the interrelation has improved travelling.

Also, Indo-Israeli co-operation will naturally bring forth security and infrastructure growth. With that in mind, startups can move and invest their money while still secured since the security breach is no longer a fear factor when countries become allies.

When the governments of both countries invest money in innovation and for research, it brings about growth in both economies. This results in a better platform for startups to operate and grow in, whereas they would have difficulties growing in a subdued economy. This is how the Indo Israeli platforms for innovation are expected to create a smoother path to growth for the startups.

Apart from the focus on startups, both governments also realise the importance of imbibing the startup and innovation culture in the students who will soon graduate, and therefore have done a lot of work to encourage R&D efforts in respective Universities.

University Grants Commission of India and the Israeli Science Foundation have set up a joint academic research program to fund R&D for the period 2013 to 2017 (Indo Israeli R&D Collaboration in Universities). Both sides have contributed $12.5M each to this fund, and the capital plans to offer $180000 for technical projects and $300000 for experimental projects in different fields. 21 projects have been funded so far.

How does the future look for Indian & Israeli startups?

According to research done by several firms NASSCOM inclusive it is believed that Indo-Israel startups have a revenue potential of $500 Billion. The future for Indo-Israel startups is bright, and a lot is expected from this co-operation. Not only the startups will gain from this bilateral relationship but also the two countries as a whole will learn from it.

Question is where the future of Indo does – Israel startups lie? The startups will get a very high advantage due to this interrelation. The revenue potential is being exploited by both countries since they have taken a positive approach to reach the mentioned potential.

The states have started increasing cross-border investments in which both countries have put a sum of money that totals up to $25 billion to support startups from both sides for the vision 2025.

Below are statistics of exports done between the two bilateral since 1999 and its growth rate.

Statistically, the future potential growth for Indo-Israel co-operation stands like at the above general view and holds glorious opportunities for startups of both countries.