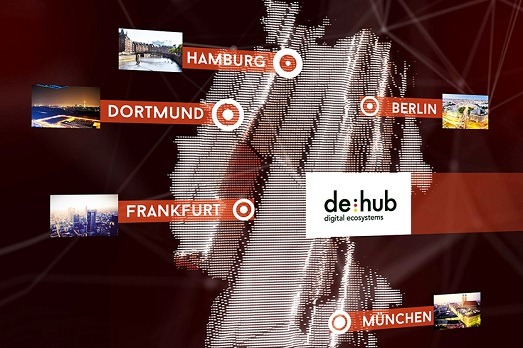 Digital hub is a venue where digital companies can collaborate for mutual growth and development. The digital hub offers a conducive environment for the young businesses to grow and for the established ones develop. The support and creative environment created by digital hub platform aid the newly formed companies maintain their progress and achieve their company goals with less struggle.

Digital hubs in Germany and role of the government

Silicon Valley has been established to become one of the most successful hubs on earth. However, Asia and Europe have started making their presence felt in the digital hub. For example, Europe has established various well-known startups in different countries. The question one will ask is that, why should we have only one giant digital hub; Silicon Valley when we could have so many of them?

In this case, the German government, through an initiative famously known as The Digital Hub Initiative is trying to foster connectivity towards strengthening cooperation amongst various startups. Germany has always made a significant move in startups, with Berlin taking the lead in this despite fierce competition internationally. It was the reason behind setting up various digital hubs across the cities in Germany, each one designed to tap the skills by way of coming up with a standard ground that promotes innovation.

The table below shows current digital hub cities and the areas of specialities:

Image courtesy of The Next Web

German government established an umbrella brand called ‘de: hub’ where these 12 digital hubs are operating under them. A report from Minister Zypries states that, apart from a robust Germany startup scene, there is also a successful science firm and well-developed SMEs and corporates. According to him, the digital hub is staged to bring in various operationalisation competencies to develop the digital architecture of Germany.

This initiative is geared towards making Germany utilise its hi-tech industries and possibly boost its market competition globally. Though the government plays a vital role in these startups, that doesn’t imply that the part played by the private sectors is insignificant.

The advisory council, which is responsible for selecting the digital hub locations is an example of the cooperation between the private and the public sectors in improving the startup environment in the country. The council operates independently and is not influenced by the Federal Ministry of Economic Affairs and Energy. This inclusivity of the private sector in decision-making is the most significant strength of these projects.

The advantages of Digital Hubs

For individuals, digital hub makes the lives of people simple, just by making it possible to integrate their benefits and items from ordinal and human services based on the same objects. These digital hub advantages are anchored on two main pillars:

Based on these two pillars, therefore, the digital hub has the following advantages:

The following is a capture of Germany’s digital hub data:

Image courtesy of Federal Ministry for Economic Affairs and Energy

German digital hub initiative is keen to address some of the problems faced by most healthcare centres, for example, collection and handling of patient’s data have been a challenge for many years to doctors and also the patients.

According to Daniel Neagu, a Professor of Computing and the principal of Computer Science at the University of Bradford, data is an essential asset. The info is vital for research, helping patients manage their conditions, and for providing a record for a person.

People who use wearables are more informed about their conditions and ultimately, their general health.

There is also effort to develop innovative technology to help mental aid health. The innovative digital solutions will make it possible for users to attend recovery sessions at home, hence, continue with their lives generally despite being faced with mental health. This initiative is aimed at stimulating the recovery college sessions.

The digital hub initiative has been all successes. From the expansion to various cities, numerous startups joining every year, and the positive impact it has made across Germany, it is without a doubt that achievements are real.

Digital entrepreneurs are mushrooming around major Germany city hubs. The main force behind this flocking is an availability of highly skilled and talented, affordable and ever-expanding ecosystems.

Other cities such as Dortmund and Frankfurt are not excluded in this. Just a month before BMWi brought to light its Digital Hub Initiative (de: hub), Sigmar Gabriel had announced that Germany would globally top on digitalisation.

Spread of startups geographically in Germany:

Though the initiative is still in its initial growth phase, the move not to put it directly under the government will make it have a diverse source of financing from local stakeholders, such as people in businesses, politics, and research. The primary goal of this initiative is to put Germany in the lead in tech hubs and increase its national and international visibility. Though, Silicon Valley remains unshakable in the tech game, Germany, backed up by other European nations are showing the signs that the winter might be on the way. The game might soon change.

In conclusion, for tech companies aspiring to build roots in the EU, Germany is the priority choice.

It offers a very conducive and vibrant atmosphere for tech companies to grow in. However, the only challenge the founder may probably face is which city to choose.

When faced with this dilemma, however, the necessary things to put into consideration are; propinquity to strategic associates, capital required, the native ecosystem and personnel and transport links.