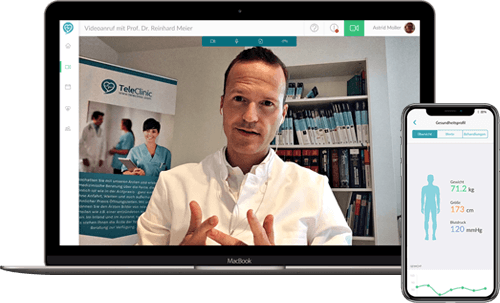 TeleClinic, a Germany-based telemedicine company has raised $7.96 million in Series A funding from Idinvest Partners to provide millions of patients with easy access to digital medical care.

As stated by an announcement that was released recently, the Germany-based telemedicine company, TeleClinic has managed to attain a funding of $7.96 million or 7 million Euro, though Series A funding arranged by Idinvest Partners. The company would be using the funds to scale its products and services using new associations and improved and increased marketing tactics.

TeleClinic is known for its 24/7 service offerings and it offers audio and visual tele-visits with the medical practitioner from over 30 different medical specialities. At present, this German company is working in association with 7,000 pharmacies and has access to about 50 percent of privately insured individuals of Germany. In 2019, it is planning to spread its service model to statutory health insurers of Germany. The current funding of $7.96 million has been built on the company’s earlier seed funding of $2.28 million or 2 million euro, which was raised last year.

The German healthcare sector is growing at an annual growth rate of 3.8 percent, and it is growing significantly faster as compared to the country’s GDP and thus, it remains unaffected by German economy’s ups and downs.

According to CEO Katharina Jünger, as the number of people who are aged and need intensive-care in Germany is increasing, the company is also expecting the demand for telemedicine services to grow in Germany. The CEO further added that teleconsultations alone are showing a potential benefit of more than EURO 4.4 billion and the company is pleased to work with someone like Idinvest Partners, who is not only a strong partner but is also someone with whom the company can actually shape the digital future of healthcare industry.

In addition, Managing Partner at in charge of Venture and Growth Capital Idinvest Partners, Matthieu Baret, also emphasized on the recurring gaps occurring in the medical care of rural patients as another possible target population that could use the services of this Munich based TeleClinic Company.

At present, the demand for virtual and remote consultations in Germany is climbing sharply into a widespread trend in the constantly changing world of Healthcare. This new period of healthcare development is being nurtured by the detailed policies placed by concerned authorities to ensure the wellbeing and confidentiality of both patients and doctors. This policy is generally recognized as the ‘E-Health Law’.

The current trend in the industry

With the way telemedicine is moving upwards in 2018 with fresh deals and an increase in the number of patients, some of the providers are working on expanding their service area in European countries and other international markets.

During the summer this year, Kry, a Stockholm, Sweden-based telemedicine company raised $66 million in order to expand its services into new EU regions.

In the meantime, Teladoc’s latest acquisitions of Best Doctors and Advance Medical has given the telehealth provider an opportunity to offer its services on a global level.