Thousands of young engineers dream of becoming next Steve Jobs or Mark Zuckerberg, from their desks in Indian cities of Bengaluru, Hyderabad & Pune. [1] More and more young people in the country of 1.26 Billion people are opting to go it alone, in stark contrast to previous generations that valued the stability of employment above all else. The area of interest varies from robots to mobile apps to smart kitchens and a cocktail-making machine. Tthe regional offices in Bangalore, which houses one of India’s biggest startup incubators, is a real ideas factory. Every meeting room bears a photo of a successful technology entrepreneur. Welcome to Technology startups in India.

On the occasion of Independence Day of India, PM Modi launched Start-up in a bid to accelerate start-up revolution in the country. It was already getting the strong acceptance from the young generation, and the program backed them in a significant way. A few decades ago, India had an era where only manufacturing start-ups established, and they aided by financial institutions of state & centre governments. [2] However, with continuous support and programs like Startup India, Digital India and Make in India from government total tech startups in India are expected to increase to 11,500 by 2020(from 3600 in 2010).

Rise in number of technology startups in India

Currently, India has more than 4, 700 tech start-ups which are highest in the world after US and Britain. Most fascinating aspect is they are fast developing. Entrepreneurs from the country are working on the drones and applications which can obtain more data from large farms of Brazil, Australia & others. [3] 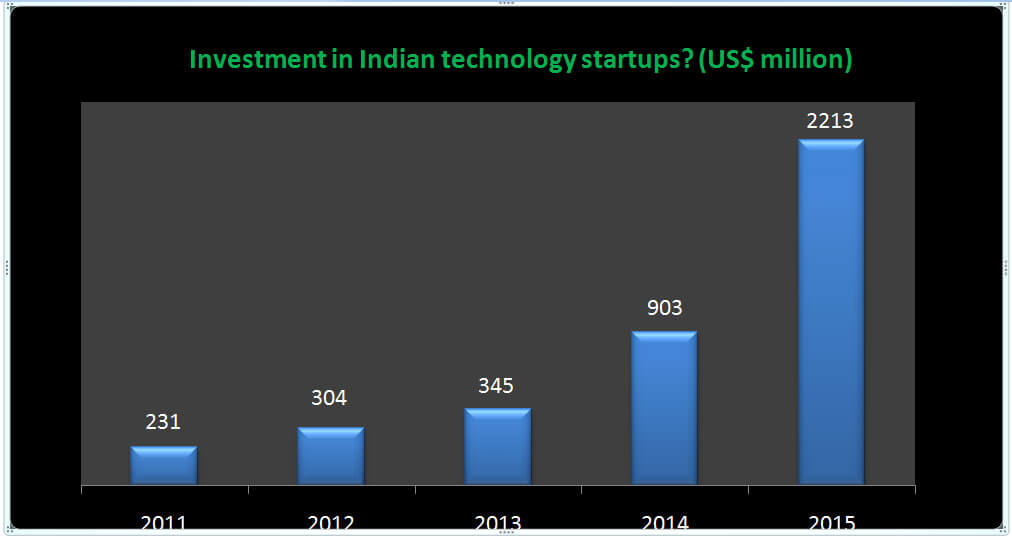 Indian VC companies received a total investment of $12 billion from over 1,200 deals in last two years. Interestingly, about $7.3 billion invested in a period of 2015-16. [4] An expert believes, right now it’s tough for investors and startups to list in India, which is why we see so many of them relocate outside the country’s borders. Exits through IPOs in India will take at least another 5-7 years. Several tech startups have witnessed three-year average revenue of more than thousand percentages which is staggering. Several dominant consumer driven tech-startups (such as e-commerce portals, food-tech sites) enjoyed soaring valuations as well. The biggest section of Indian startups is filled up by E-commerce sector (33%). India’s E-commerce market is expected to reach US$ 220 billion regarding gross merchandise value (GMV) and 530 million shoppers by 2025.

Rate of failure and reasons why technology startups in India fail

It is natural that all of the newly established start-ups won’t survive until the end. It is because most of them do not get proper mentoring.  It has never been so easy to launch a start-up thanks to some resources one get. The power of information and networking has also helped considerably.  As a result, the pace of change is speeding up, and the implications of this are immense.