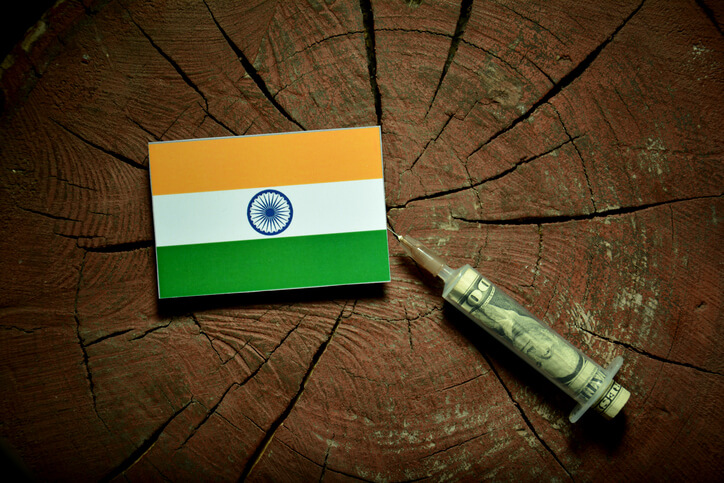 Venture capital usually made in rapidly growing firms which require enormous funding or the start-ups who have a robust business strategy. Venture capitalists in India often invest in private start-up companies with a high-profit potential. The venture capital firms get the percentage ownership of the business in exchange for the investments they made. Others want to have the control over planning & payment of miscellaneous fees. Such firms expect a high rate of return because of the highly tentative nature of businesses they invest. [1] Besides, they often wish to obtain this performance over a relatively short (usually within 3 to 7 years). A large number of venture capitalists in India are seeing investing Indian technology startups.

We have seen investments in Indian start-ups on an upswing recently, topping close to US$9 Billion in FY2015-16 and accounting close to 1000 deals. In India, VCs in India are often interested in companies with low valuation and excellent chance to get higher annual profits. Venture capital era in India began with the acquisition of E-commerce store “Flipkart” by Tiger Global Management in 2010. [2] Along with top-ranked E-commerce sector; healthcare, edu-tech and travel industry also appealed investor’s attention. 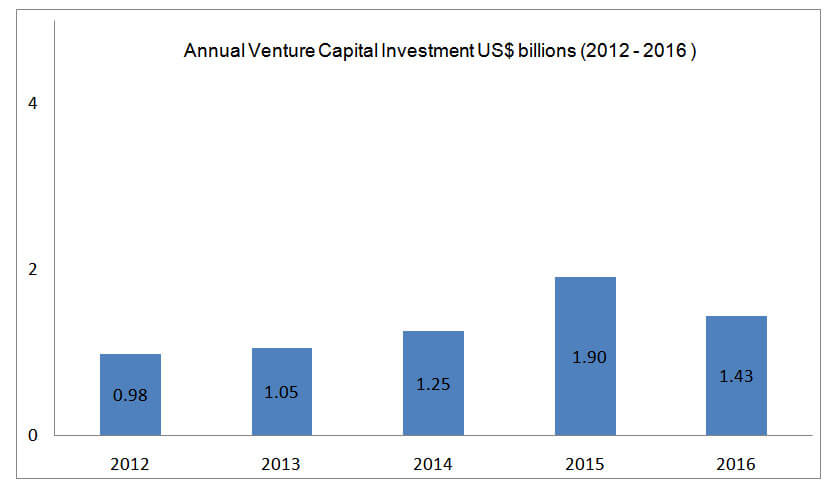 2016 saw a sharp slowdown, justified by the mass mentality with which angels and investors jumped onto the movement of investing in every startup that popped up. In 2016, funding announcements saw a decline in value of 55 percent from the same period in 2015, some deals, however, has increased by 3%. On an average, four startup deals were announced every weekday throughout 2016.

Overview of Venture capitalists in India

Sequoia Capital, one of the top venture capitalists in India has around 130 businesses under its portfolio. They focus on healthcare financial, internet & mobile start-ups.  SIDBI Venture Capital Company focuses on small and medium-sized enterprises. SIDBI raised close to US$ 7 billion funds in 2014-2015.

Delhi saw the highest number of deals with 32%, while Bengaluru received 30% of deals and Mumbai based start-us followed by 27%. Chennai, Pune & Hyderabad received followed-up with 3.8%, 1.7% and 1.4% deals respectively. Other cities that are unfolding as startup hubs and developing investor interest are Ahmedabad, Jaipur, Indore, Kolkata, and Vadodara.

Venture capital investment supports the growth of innovative entrepreneurship in India. Morgan Stanley predicts an investment of $120 billion in India by VC’s a new set of brave souls willing to bet their millions. If any business seeks finance to his project and industry through venture capital, he has the following sources available to him for providing funding.

Since India’s economy has been growing at 7-8 percent a year, investors reserved their interest in 2008-09 due to recession in the global economy and then picked up slowly in 2010 and then onwards.

Double tax avoidance arrangement of India with Singapore and Mauritius changed in recent years. Further, several regulatory reforms have been made in India, especially on foreign investments into Alternative Investment Funds (AIFs). For portfolio stockholders, choice of acquirers has more importance due to the revision of Finance Act of 2014 to set the position. Finance Act, 2017 has also introduced an amendment to Section 47 of the ITA to exempt gains capital gains tax.

The structure of VC industry in India

Venture Capital is the hottest trend in India but many start-ups & founders who are confused about how the VC funding works. Most entrepreneurs are always looking for the banks or other sources of the funding.

VC process involves, budding entrepreneurs, financial wizards, and venture capital funds which are recognized by the SEBI in India. General Partners (GP) and Limited Partners (LP) divided into two broad categories of VC fund. GPs serve to manage the fund and execute investments with the money to return that capital to the LPs. Based on a proposal from GPs numerous investment experts will commit their money to VC fund in India.

VC firms raise funding from LPs, who are groups of other funds with a hope of making higher returns on their money. The funding does not depend on their location geographically and the firms they’re investing.

The Venture capital sector is the most vigorous in the financial market today. They are the important source of equity for start-ups. In last five years, Venture capital market has taken off in India. VCs not only provide monetary resources but also guide founder with fresh ideas to succeed.

India appears to be a chief focus of venture capitalists in Asia. Demonetization movements in 2016 have contributed mainly to an increase in a transaction of payment & mobile wallet companies. IT industry continued to appeal highest PE investment in 2016 followed by the financial sector.

Infrastructure industry is gaining momentum in recent years because of numerous projects are undertaken by the central government. A significant difference from 2015 was the emergence of the health care sector with almost 8% of deal value in 2016. According to experts healthcare, automobile, and infrastructure sectors will see noticeable investment from venture capitalists/PEs in next few years.

Venture capital is the investment made in startups or small businesses that usually have high growth potential. Usually, VCs are high net worth a professional, insurance firm, pension funds etc. and their objective is to earn a maximum return on the money they invest.

There are many venture capitalists in India that might be useful if you’re looking for some investment to flow into your business plan. Here are the websites where you can find them:
https://sutrahr.com/top-venture-capital-firms-india-best-vc-list

Every startup once reaches the growth stage, requires an ample amount of funding to scale up. Venture capital firms can considerably boost your growth and are an excellent resource for a startup that meets their investment criteria.
Must-have traits your business needs to attract funding from venture capitalists:

Navi Mumbai-based Anthea currently has four plants. Anthea group produces materials for the food fragrance & flavour industry. Interest in aromatics sector has increased due to an efficient opening of IPO of Blackstone. [7]

Series A, Series B & Series C might be new terms for someone new to early-stage investment. Series A, B, and C are essential components that decide to bootstrap, and it only corresponds to rising stage of businesses that are raising fund.

Series Seed: Figuring out the product and getting to product fit

You can imagine seed capital like an analogy for planting a seed for a tree. This round nourishes the seed or the purpose of the startup. The seed money hopefully grows into a mature operating business, or “tree,” when enough revenue gets generated with the help of investor’s wallets.

The capital raised during seed phase is around the US $500,000 to 2 million but varies extensively on a case by case basis. The key players in this round are gamblers. Usually, angel investors & VC firms experiment in this less formal series of investment.

Series A: Scaling the product and getting to a business model

After the company has shown some of a track history, Series A funding is useful in optimizing product and customer base. Opportunities may be taken to scale the product across different markets. In this round, it’s important to have a plan for developing a business model that will generate long-term profit.

Investors of Series A round come from more traditional venture firms. Top VC firms involved in this round are Sequoia, Greylock, Access, Benchmark etc. Angel investors also invest in Series A but have less impact.

Series B: Scaling the business

The Series B is usually all about growing. It’s about taking businesses to the next level, past the development stage. Investor’s help start-ups get there by expanding market reach. In Series B, venture capitalists have more of imagination around what the pie will look like, and how big of a slice they might obtain. Building an appealing product requires quality management & talent to back it. Estimated capital for Series B looks around $7 to $10 million.

Series B looks similar to Series A in terms f process & key players. But the difference in this round is the addition of new wave that specialises in later stage funding. [9]

In Series C round, investors put money into the prosperous businesses in an attempt to get a double return from it. Vc firms make single digit to hundred million in this round.

One way to scale a business is to acquire another. Your competitor also has a competitive edge that we could get the benefit. Founders, investors & investment culture consider the merger could be a fruitful partnership.
In Series C round, groups like hedge funds, investment banks, equity firms & leading market groups connect with the investors.

To summarize it, understanding the contrast between these rounds of raising capital will help you interpret startup news and assess business probabilities. The rounds of funding work in primarily the same basic manner; investors offer money in return for an equity stake in the firm. Between the rounds, investors make slightly different requests on the startup.

Nonetheless, Seed, Series A, B, and C investors all nurture ideas to come to the realisation. [10] Series funding allows investors to encourage entrepreneurs with the actual investment to pursue their dreams, possibly cashing out collectively down the line in an IPO.

Prognosis for the next five years

India growth story remains intact, and despite the impact of demonetization declared in November 2016, India is expected to regain the position of the ‘fastest-growing major economy’ in 2017. Long-term growth trend along with India’s market strength continues to attract VC investment in the country.

Numerous international VC fund leaders admit that they’re looking for massive investment in India over next few years. [11] To make startup investments more profitable for foreign investors, SEBI further eased rules for angel funding in startups. Angel funds have now been permitted to invest in up to five-year-old startups. Further, the least investment threshold for angel funds is decreased from US$ 5 Million to US$ 2.5 Million. It will help smaller companies with lesser capital requirements raise money during the initial stages of their journey.

After the excitement in 2015, investors restrained and stayed away from inflated valuations. As a result, 2016 was more realistic to the India companies.
This year, VCs are likely to invest in sustainable businesses with robust business model & a thriving product. Hence founders need to prepare well to receive funding from VC and equity firms.

Nevertheless, VCs will continue to invest in India with an eye to get high returns on their investment. [12]