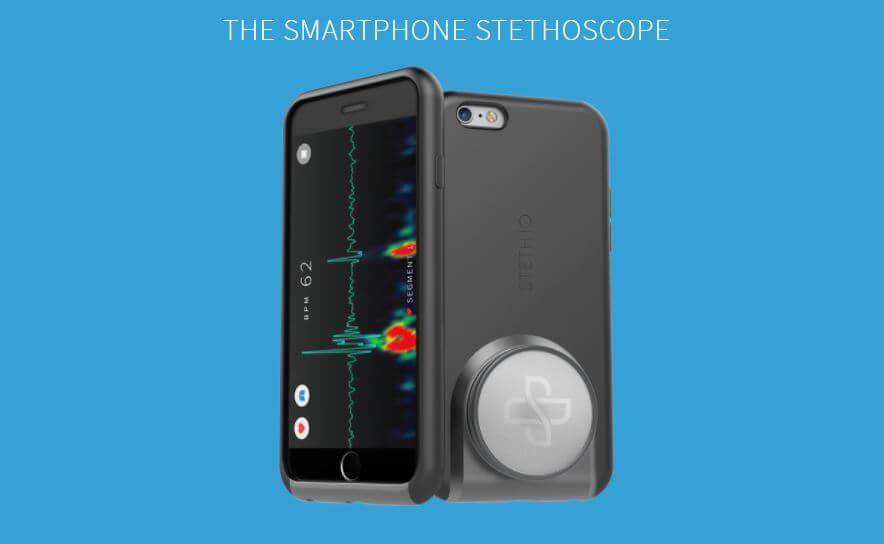 Steth IO announced the release of its new smartphone based digital stethoscope for iPhone users. The app allows doctors to listen to the beats and visualize the human heart.

Washington Based company, Steth IO announced the release of its new digital stethoscope which will be based on smartphone technology.

This stethoscope will also be named after its maker, Steth IO, and is a unique product which will be built directly on the outer protective cover of a Doctor’s iPhone.

This will permit them to listen and finally, measure the heartbeat of their patients. The stethoscope is priced at USD 199 and secured an FDA clearance way back in 2016.

Co-Founder of Steth IO, Dr.Mahesh Mulumudi said that he is a personal user of the product and mentioned that it has helped him tremendously during diagnostics of his patients. He further added that the product allowed patients to be more engaged in their own physical exam.

Another co-founder of Steth IO, Mr. Suman Mulumudi was aged just 14 years old when he started working on this project. At a tender age of just 15 years old, Steth IO finally featured on Jimmy Falcon’s Tonight Show and by the time he turned 19 years old, the product was ready to make its commercial bout in the market.

The product is unique and boasts a series of interesting features to go with it. It requires no set of batteries to power it, nor does it require any charging as well.

It makes use of a free app with which doctors can see the entire visualization of the human heart and may opt to listen to the heartbeat either through speakers or through the headphones.

In addition, the doctors can now also record all their examinations and organize each patient records within their own app menu.

One of the most interesting features of this product is that the bell of the stethoscope has been directly integrated as part of the iPhone case and is also patented as well. You do not need to use any Bluetooth pairings or batteries. The mobile application by Steth IO displays all the results captured by the stereoscope and displays it in real time as well. At the same time, the doctors can see both the heart and lung sounds using their iPhone.

The app is designed to make use of its digital features to filter out any unwanted frequencies which are deemed unnecessary. Furthermore, Steth IO is planning to add AI capabilities to the product as well.

Mr. Mulumudi said that most of the patients with chronic heart diseases end up spending exuberant amounts of money on treatments owing to the expensive medical devices used as part of its treatment.

He is hopeful of the fact that with the help of Steth IO, patients can save a lot of money and this device, coupled with AI will help doctors easily detect heart-related problems during emergencies while also helping keep costs a little on the lesser side.