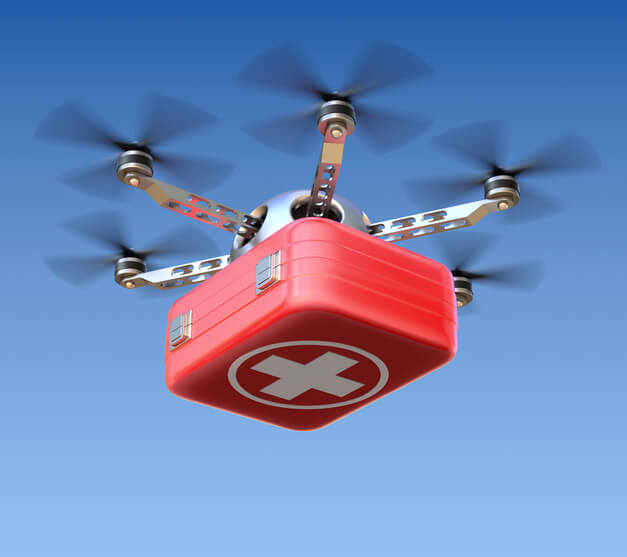 Drones in the medical supply chain

Drone technology is among the growing and rapidly evolving technologies. This technology has been proven beyond imagination to be very valuable in many industries like military, business, and recently in medical supplies. Flying drones could one day carry life-or-death medical supplies between hospitals and locations. A huge sum of money is getting invested in this segment, and so far, the primary outcome is indeed promising. Drones in the medical supply chain are getting a lot of attention and have become a blessing in disguise for many.

According to a recent market report, “The Worldwide UAV drones market is projected to rise to $21 Billion by 2022. Some of the major drone distributors include Multicopter Warehouse (U.S.), WYNIT Distribution (U.S.) and Drone SmartX (U.S.). Google, Amazon, DHL (Germany) are the primary consumers among others. Regarding the different geographies, North America and APAC are expected to hold the largest market share between 2016 and 2022.”

Drones have great potential in making the transport of drugs, vaccines or medical aids faster. Around the world, many technology companies are now teaming up with health organizations to explore the use of drones in solving longstanding challenges to health care delivery.

It’s not possible to track each drone company in such a fast-moving industry. We have found some of the best drones’ service providers and manufacturers here on http://uavcoach.com/drone-companies/.

The distribution of health care around the world is shockingly uneven and unsuccessful. Remote rural locations do not get their fair share of health care resources.

Per an article in The Guardian, Of the 17 million a year who die from heart disease, 78% are in developing countries like Brazil. In developing countries like Tanzania, Zambia, and Zimbabwe, HIV infection rates are the epidemic. There are many parts of Botswana where almost every other young man or woman someone meets will perhaps have HIV. Between 500,000 and 1.7 million lives in total lost every year due to Aids only in South Africa.
Recent research on “Challenges Facing Global Pharmaceutical Supply Chains” done by Privett and Gonsalvez highlights and prioritizes the global health pharmaceutical supply chain challenges:

Where do drones fit in?

There can be a range of potentials for UAVs in the humanitarian and health care sector. It seems vibrant that the coming future will bring with it an astonishing amount of change.

African nations are among the world’s poorest countries, and the lack of basic access to health care resources remains to be a persistent issue. Yearly, millions of human lives are lost from polio, childbirth, AIDS, malaria, and tuberculosis which can be prevented with proper medical supplies.

Some hard-hitting facts in Africa and Sub-Sahara – 83 % of rural residents have no adequate access to health care. Countries Like Niger, Ethiopia, Nigeria, Malawi who face the highest levels of poverty are the ones that are most affected. In 2010, nearly 68% of all people living with HIV were residents of sub-Saharan Africa who are just 12% of the global population. AIDS still claims around one million lives each year in Africa.

Aerial drones can assist in solving healthcare challenges in Africa in many ways:

Although drones hold great promise for medical product conveyance, the field is still in its infant stage. There are quite a lot of challenges for application of Medical Drones.

The rise of population has equally contributed to the increase of healthcare requirements. The World is more in need of drones as a practical means to fill the shortages of medical and healthcare facilities. With more collaborations and efforts among organizations, enterprises, governments, and non-profits, the gap between the developed and developing countries can be narrowed in the future.

Drones application in the form of ‘flying ambulance’ or ‘drugs carrier’ can indeed become a blessing from the sky in future for many.