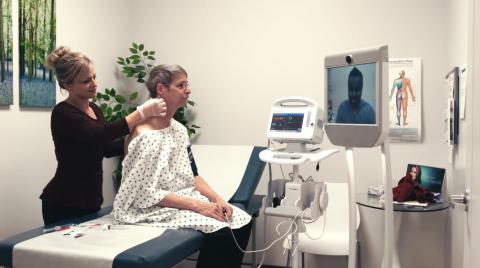 FDA clears the use of telemedicine robot for virtual consultation

The robot named Beam is used by ‘Miramont Family Medicine’ healthcare practice in northern Colorado to provide virtual consultation to the patients across 4 health centres.

The day isn’t far when the telepresence robots will be a common sight in hospitals across the world. Recently, FDA cleared the use of telemedicine robots that are to be marketed by InTouch Health. Similarly, many other companies are at the forefront in developing advanced telemedicine robots that can not only transmit audio and video between the patient and the remotely located doctor but also have the ability to sense objects and map their environment in the busy hospitals.

For example, Miramont Family Medicine based in Fort Collins, Colorado uses telepresence robot named Beam developed by Suitable Technologies across its four centres in the northern part of the state. The healthcare practice had expanded in size and scope and the doctors had to travel amongst the four locations on a requirement basis.

John Bender, the company’s CEO wanted to use a virtual method that would allow for remote consultation without having to be physically present at each location. And thus, they started using Beam, that offers much more than what would have been possible with a phone consultation.

Beam has two legs with wheels and a screen for a face. The screen is used to show the live video streaming on both the sides. The robot that enables telepresence, when fully charged, can work up to eight hours a stretch. At Miramont, Beams are parked in the charging docks near the hospital staff workstations.

“I can log in from my computer or phone from wherever I am and drive the Beam around the office for up to eight hours at a time without needing a charge,” Bender said. “Beams have a solid base with wheels that manoeuvre extremely well so I can navigate small spaces or go over bumps in the carpet. I even use the speed boost often to quickly get from one room to another.”

The robot such enables a natural conversation that takes place such that the person feels like sitting in the same room as yours. Miramont Family Medicine has used Beam to see as many as thirteen patients in a single day; the practice says it would not have been possible otherwise.

The robot is not only used to assist in simple consultations but can also assist in cases where the doctors are seeing the condition for the first time. The hospital initially used Beam to provide remote consultations on nutrition, psychology and clinical pharmacy. But later, it claims to have overseen cases of addiction followup, kidney infection treatment and care and fibreglass cast removals.

For Bender, Beam serves multiple purposes. “I’ve also provided tours of my clinics to visitors on either side, checked up on employees, came to a staff member’s aid when beckoned, and even handled a surprise DEA inspection of one of our facilities.”

The best thing is Beam, with its two legs with wheels and a screen for the live face, is easy-to-operate for people on both the ends of the conversation; it doesn’t require any special technological skills.

A person can ‘beam-in’ simply from a smartphone app or by logging from a computer.

Moreover, the robot can move around the hospital, which lets Bender monitor the hospital activities, which is impossible with a standard video call. All the more, the robot gives great audio and video quality regardless of the background noise.