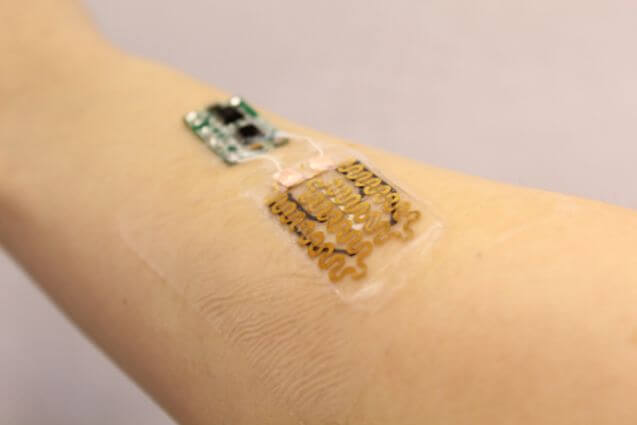 The researchers developed a smart bandage concept that includes heating elements and thermoresponsive drug carriers that can deliver tailored treatments.

Researchers in the US have come up with an innovative bandage that has the capability of monitoring how a wound is progressing in real time. The bandage uses technology to deliver drugs and be able to monitor chronic wounds. The researchers who are from Tufts University unveiled this prototype bandage that will use sensors to monitor wounds and incorporated pH and temperature. The wound would still continue to heal effectively from a passive treatment into an active part of the process of healing.

The bandage has embedded pH heating elements and temperature sensors which will show inflammation and track infections.

The US government has partnered with Tuft University researchers to ensure patients who suffer from chronic skin wounds that are caused by diabetes, burns, and other non-traumatic conditions can be monitored with a lot of ease and recover quickly. The prototype dressing will identify different changes that are happening in the wound where the necessary action will be taken.

When combined with the sensors, the microprocessor interprets the data collected and send information to a mobile device through Bluetooth. The bandage will release treatment when triggered by either the user or special sensors that can read parameter.

To attach the bandage a medical tape that is transparent is used by doctors and will create flexibility while the bandage is less than 3 mm thick. The bandage has been tested successfully tested under vitro conditions where it was proved to boost healing comparing to traditional bandages combined with wound care products.

This bandage has no comparison because the advantages outweighs everything. In the US, more than 5.7 million people are affected with chronic wounds thus costing the costing the country more $ 20 billion annually.

The report that was released from the research shows that patients are not able to provide themselves care, where if they attend medical checkup the are treated as outpatients or they are taken care at home by caregivers. Chronic wounds need extra care to monitor the PH and temperature where the smart bandage will do wonders using the sensors.

In a press release, corresponding co-author Dr. Sameer Sonkusale who is the professor of electrical and computer engineering at Tufts University’s School of engineering said that “We’ve been able to take a new approach to bandages because of the emergence of flexible electronics. In fact, flexible electronics have made many wearable medical devices possible, but bandages have changed little since the beginnings of medicine. We are simply applying modern technology to an ancient art in the hopes of improving outcomes for an intractable problem.”

The smart bandage that researchers have created with pH and temperature sensors and antibiotic drug delivery, is really a prototype for a wide range of possibilities.

One can imagine embedding other sensing components, drugs and growth factors that treat different conditions in response to different healing markers.

The bandage will benefit patients with chronic wounds in monitoring it and ensuring the healing process has taken little time. The researchers and innovators want to facelift the health sector and establish more medical technologies. The bandage will reduce bacterial infection in the wound. The bandage will deliver medication on time and send any message to a mobile device through Bluetooth.