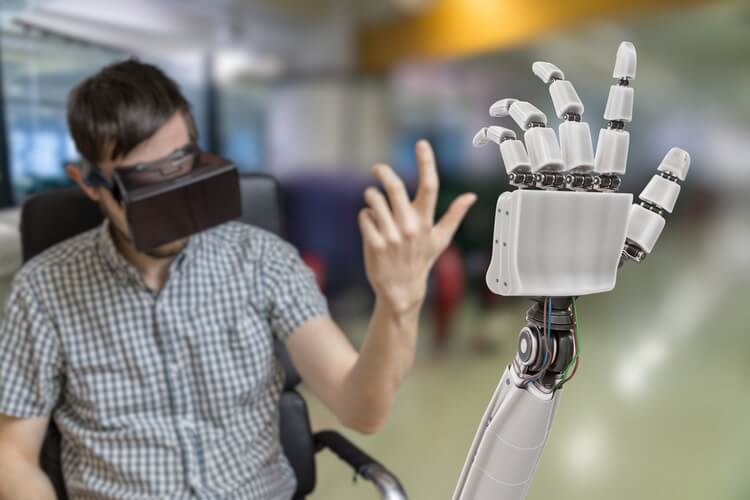 Amputees’ brains can be tricked into believing that their prosthetic body parts are an extension of their body.

A recent paper published by a team of European researchers in the Journal of Neurology, Neurosurgery, and Psychiatry stated that Virtual Reality can be combined with the tangible artificial senses to make the amputees believe that their prosthetic arm is an extension of their phantom arm.

How the technology works

The human brain works on a principle – it evaluates what belongs to the body and what is external to the body. These researchers, by creating an illusion that the prosthetic arm is actually a part of the person’s body, can make the brain believe that there is no proper distinction between the phantom arm and the artificiality.

The setup makes use of both the visual sense and the sense of touch to create this illusion. It results in better identification by the brain and the patient could feel that the arm was theirs and not anything attached to them externally.

This setup is portable, meaning that it can be carried anywhere. This does not alienate a person from his/her body but rather makes them belong to it. This can also cut short the sufferings and pain of the prosthetic arm/leg attached to the patients.

When the researchers asked the patients about how they felt when they used this technology, they replied that they could feel that their phantom arm had grown and extended to the prosthetic arm. They could not feel the pain or alienation anymore. Also, patients having two prosthetic arms replied that their phantom arms felt short before the test was carried out. And indeed, it was found out that the phantom arm had grown and extended during the setup and remained like that for ten minutes. This is known as ‘telescoping’.

This technology could help patients feel that the prosthetic arm was theirs and was in fact embodied in them, instead of making them feel that they were carrying a burden of an artificial one.

This can also help them in relieving their pain of the phantom limbs.

There are also similar technologies evolving which use Virtual Reality to explore the relationship between the brain and the body. Google Glass has already helped children with Autism to respond better to social circumstances with the help of the wearable device.

This breakthrough in the digital healthcare field has a lot of scope in the future for using VR and AI to make the patients’ lives easier and less painful.