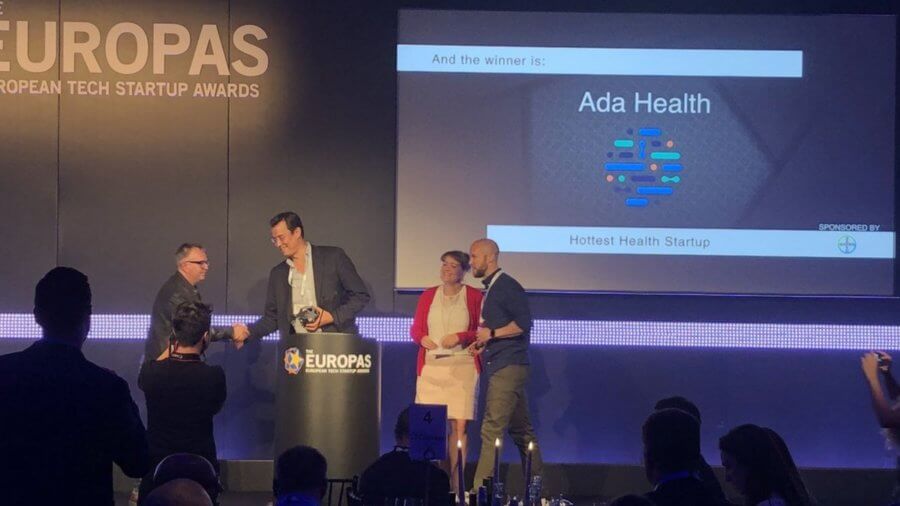 The Europas Awards and Unconference is an award function where Europe’s most promising tech and crypto startups battle out for awards in various categories. This year’s edition was held in London and the attendees to the vent included the elite of Europe’s startups, VCs and well as other prominent entrepreneurs.

The event was curated in association with TechCrunch events where the voting for the awards was made open to the public during the start of last month.

Once the votes were cast by thousands of industry experts as well as other prominent investors, the results were announced at a gala function on 3rd July 2018 in London.

ADA health is a Berlin and London based healthcare startup which has made a strong name in the award function for itself all thanks to its adoption of Artificial Intelligence technology.

The company offers a personalized AI-powered healthcare app whose conversational interface has been designed to help the patient punch in the symptoms based on which further information is provided by the app. In extreme cases, a follow-up appointment request is furnished with the nearest doctor.

The two founders of this startup go by the name of Daniel Nathrath and Dr. Claire Novorol who are holding the position of CEO and the CMO respectively. They say that the app has been in existence for more than 7 years and journey so far has been all the more overwhelming. They further added that the app is aimed towards making life easier for patients by giving them access to a much more customer-oriented healthcare interface.

In its simple most working, all you have to do is enter your symptoms on to the app post which you will be posed a number of questions.

Based on the answers you give, the ADA Healthcare app will provide you with three possible solutions for the same by which the problem can be treated easily.

Over the years, there have been a number of healthcare startups who have adopted AI as part of their systems. One classic example can be found here.

The Europa’s Awards are a prestigious set of awards which are given only to the most promising startups in the European region. By bagging the hottest healthcare startup award, ADA Healthcare has certainly forged a reputation for itself in the medical world.

With more exciting projects lined up, the company will now continue its march towards integrating Artificial Intelligence technology with its already existing App platform. The future certainly looks bright for the organization.