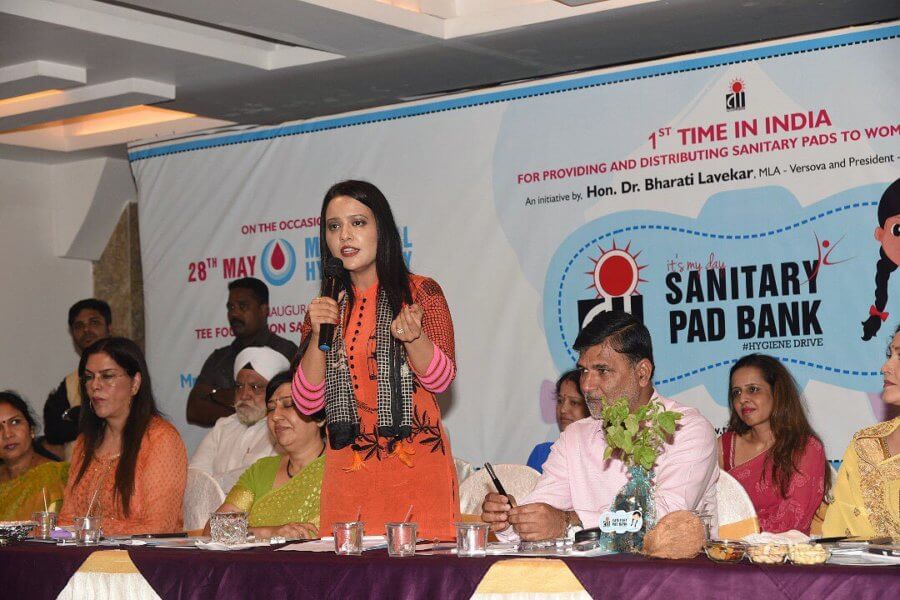 Maharashtra MLA launches a digital napkin bank to aid the underprivileged women of the nation. She has taken this step to educate the women about the menstrual hygiene and personal cleanliness.

Many old-school ideas regarding the menstruation process have been prevailing in the premises of the country. Understanding the gravity of the situation, Dr. Bharati Lavekar, an MLA in Maharashtra initiated a new venture in which the underprivileged women would be provided with free sanitary pads. Not just that, Lavekar is also educating the women of her region about the importance of using sanitary napkins, menstrual hygiene and personal cleanliness.

She has set an example of determination and hard-work. This has been done by taking steps which were never even considered while looking out for areas that need to be improvised. She has made sanitary napkins easily available for the women, thereby rendering menstrual hygiene necessary.

All the events were disclosed on World Menstrual day when Dr. Bharati Lavekar narrated the story as to how the idea of installing a digital sanitary napkin bank emerged all of a sudden. It was when she paid a visit to the women of her constituency that she realized how crucial the napkin bank is.

On asking, most of the women told her that they use cloth pieces instead of sanitary napkins during menstruation. Such a practice is associated with widespread infections along with their transmission.

That’s when the MLA realized how grave the situation is and found out ways to deal with the same. Along with this, the MLA also advised the education team to provide the students with period leave as menstrual cycle is a lot to bear for them. According to a research done, the MLA told the public that about 85% of the women in the country don’t use sanitary pads during their periods.

Over 66% of them don’t get toilets to use while they’re on periods and 70% of the women are daunted by the belief that menstrual blood is impure. Amongst the 85% women who don’t use sanitary pads, all of them use harmful materials like cloth, ashes, husk, sand and leaves during the bleeding cycle.

One such initiative has already been taken by an African innovator Lulu-said-Ameir wherein she installed an automatic sanitary napkin machine to aid the menstrual cycle of underprivileged women.

Be a Lady is a project in the premises of Tanzania, Africa that emphasizes on the use of sanitary pads and has worked towards installing automatic sanitaring napkin vending machines.

Lulu-said-Ameir’s project is somewhat similar to what our Indian MLA has been doing. These kinds of initiatives are much needed to change the perception of society and eradicate orthodox beliefs.