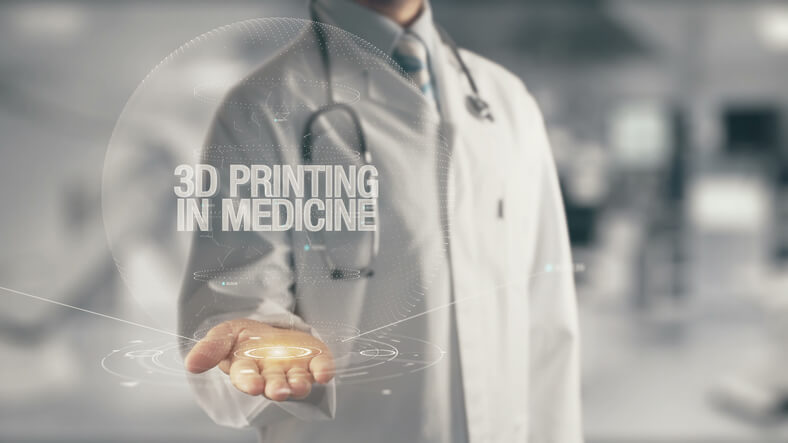 3D printing is making a huge influence in the medical and healthcare industry with the evolution of 3D bioprinting. New structures or shapes can be manufactured that could not be fabricated using other engineering methods. Regardless of being a young technology, the evolution and impact in the fields of tissue engineering and organ printing have progressed rapidly.

They are key to 3D bioprinting, especially creating skin tissue, instead of coloured inks and cartridges, injectors with biological mechanisms are used.

They are key to 3D bioprinting, especially building skin tissue, instead of coloured inks and cartridges, nozzles with biological mechanisms are used.

Scientists from the University of Bristol developed a new bio-ink for 3D printing with stem cells that allows printing of actual living tissue known as bioprinting. A bio-ink contains two separate polymer components: a sacrificial synthetic polymer used in the medical industry and a natural polymer extracted from seaweed.

Research is currently being conducted into the opportunity of 3D printers being able to reproduce the complex organs that sustain our bodies. Researchers and Scientists at Princeton University have successfully printed a sample outer ear from human cells, silver nanoparticles, and hydrogel. Custom made joints and bones can also be produced. They say this with much hope.

How is printing human skin not futuristic anymore?

BioDan Group, the Spanish bioengineering firm specializing in regenerative medicine, collaborated with the Scientists from the Center for Energy, Environmental and Technological Research, Hospital General Universitario Gregorio Marañón and Universidad Carlos III de Madrid, have offered a 3D bioprinter prototype that can create a fully functional human skin. This skin is suitable for transplanting to patients or for the cosmetic, chemical, and medical products testing or use in research.

There are some benefits to this new technology to society. “The technique of bioprinting allows the skin to be generated in a consistent, automated way, and the procedure is less costly than producing manually,” said by Alfredo Brisac, who is the CEO of BioDan Group.

Presently, this marvellous development is in the stage of being approved by different European governing agencies to guarantee that the skin that is produced is acceptable for transplants on patients suffered burns and skin problems.

Skin is considered the largest organ of the body, having a composite multilayered structure and protects the supporting muscles, bones, tendons, and internal organs. It fills in as the primary line of resistance to any outer jolts; hence it is the most exposed to injury and permits the need for quick and stable regeneration methods.

Given this more prominent need, 3D bioprinting is a promising innovation that can accomplish the immediate and permanent creation of biomimetic cell skin substitutes, fulfilling both clinical and modern needs. Reinstating all the purposes and functions of the skin will be possible with the new tissue building techniques.

3D printing is a fast prototyping and improved manufacturing technology used to create sophisticated engineering with high accuracy through a layer-by-layer structure process. It covered endless areas where it can be seen as a miracle using 3D printing and nanotechnology.

3D printers are likewise being utilized to give prosthetics at a much lower cost than earlier. Organ Transplantations are expensive, yet when printers are joined with the 3D imaging procedures as of now being utilized by the healthcare industry, this turns into a more practical arrangement.

An individual life-sparing operation can be performed with filling or replacing body tissues can be developed with the highest precision.

Traditional Beauty brand L’Oréal is 3D printing human skin tissue to test beauty products and cosmetics. The corporation has joined with bioprinting professional Organavo, which can deliver living human tissues that copy the form and capacity of local tissues in the body, referring to “unlimited” potential for new sorts of tests.

The University of Iowa Mechanical and Industrial Engineering Department is dealing with organ printing, where they utilize a 3D printer to print living structures with bio-ink. The objective is to print a working organ that can be transplanted into patients. This venture is partly supported by the Institute for Clinical and Translational Science at the University of Iowa.

A Philadelphia-based startup, BioBots, revealed a $10,000 3D printer that prints human tissue. BioBots launched publicly at TechCrunch Disrupt in New York City last year. Until now, the company has been working with 50 distinctive research labs at universities around the world to Immaculate its 3D printer, CEO Danny Cabrera said, “The objective is to put them on every lab worktable around the world.”

A new era of 3D printing with bio-ink

The most obvious potential for 3D printing may be in the manufacturing business. However, this marvel has a diversity of uses, which are yet to determine. Whether 3D printers are inevitably ready to deliver fully working organs is merely a vision as of now, but the healthcare industry is already profiting immensely from this relatively young technology with the capacity to produce tailored medical solutions.

Application of 3D printing concepts to nanotechnology will make printing quicker, proficient, and more financially reasonable much sooner than most futurists at any point imagined. A paradigm shift in healthcare solutions can be seen in the near future.