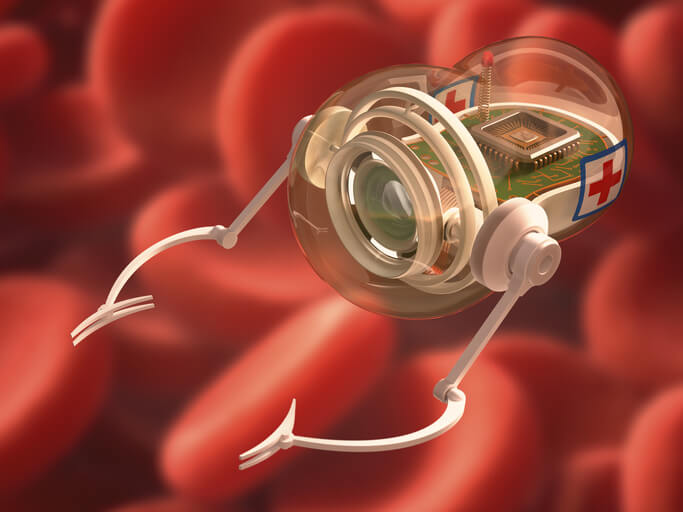 Although ingestible robots sound nothing short than science fiction, scientists at Massachusetts Institute of Technology, the University of Sheffield and Tokyo Institute of Technology have demonstrated a foldable origami robot which can be ingested and controlled with external magnetic fields to operate inside our body.

Most of the parents have faced horrors of children swallowing buttons or other harmful items which are sometimes nearly impossible to extract unless operated and cut open. Scientists have long been asking: what if we operate from the inside? And there comes ingestible robots, which can be used to patch up wounds or deliver medicine to the sites earlier thought difficult to reach.

The small origami robots have previously held the attention of NASA as a prototype to send small objects to space for various tasks like repair, attachment, and construction. Following a long set of papers on “origami robots” by Rus et al. , the foldable ingestible robots have finally paved the way for the health sector. “For applications inside the body, we need a small, controllable, untethered robot system. It’s challenging to control and place a robot inside the body if the robot is attached to a tether,” says Rus, director of MIT’s Computer Science and Artificial Intelligence Laboratory (CSAIL).

The ingestible robot propels itself using “stick-slip” motion, where appendages stick to the surface when working and slip when it’s not as a result of weight distribution.

It consists of layers of structural materials with different heating properties which determine how the robot shall behave in a given condition. It also partially relies on thrust motion of stomach for proper movement.

Composed of biomaterial called biolefin (which is acquired from pig guts), it is easily ingestible, harmless to human body, and designed to hold against the acidic nature of oesophagus and operate to primarily remove the battery and consequent burns as a result of an electric discharge in stomach conditions.

A common question is whether ingesting robot would be painful, but researchers disagree. “It’s similar to swallowing an ice cube” they claim.  Another issue that arises: “what if it gets stuck?” Scientists are working on better magnets and origami techniques to prevent it.

Ingestible robots and their health benefits

What are the various health concerns it addresses?

Although scientists are still working on certain technical issues of movement and drug delivery safety, with US Foods and Drugs Administration stating, “It’s interesting, but we need to be very careful before it hits the markets, ” scientists at MIT are confident at the current progress. “It started with dislodging button batteries from children’s bellies, and progressed up to this” They have indicated that robots can also be custom made to patch a wound in the stomach from ulcers and burns as a result of chemicals spilling from button batteries when the outer covering melts in acidic conditions and the thick lining of esophagus burns.

Also, investigations are further done to design a better biodegradable material for the robot which can be heat resistant and stiffer compared to the current versions. Trials are already made with pig guts based material with silicone gel representing oesophagus and mixture of lime juice and water to replicate acidic conditions of the stomach.

The animal trials are yet to be published, and it might take at least ten years to hit markets. Despite all that, ingestible robots are already creating waves with current technological developments and investments.

According to a new study by Grand View Search, the surgical robot market and the associated products shall reach around 20.8 Billion USD. As Dr Maja Mataric, IEEE Fellow and Founding Director of the University of Southern California’s Center for Robotics and Embedded Systems says, “It is an incredibly exciting time in the development of smaller robot technologies that will be used for a variety of applications that can enhance our lives shortly.”  Ingestible robot technologies offer a broad range of applications, from drugs injection to specific sites to object retrieval. “The robots are among us,” says Steve Jurvetson, a Silicon Valley investor and a director at Elon Musk’s Tesla and SpaceX companies, which invests heavily on robotics. Corporations like ZEUS and AESOP also see a future in surgical robots, investing massively in the coming technologies.

So, what are you waiting? The future is here!