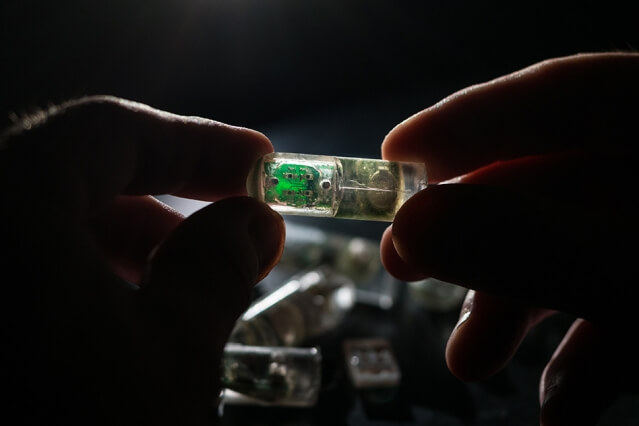 The ‘bacteria-on-a-chip’ device combines sensors made from living cells with ultra-low-power electronics to convert the bacterial response into a wireless signal that can be read by a smartphone.

MIT researchers are known worldwide because of their innovative ways of solving world’s most challenging things. They have come up with creative collaborations with other leading research institutes and consortia in the world to see how best they can offer the eHealth solutions.

Through this collaboration, MIT has been able to come-up with a sensor to diagnose a gastrointestinal problem. This team from Massachusetts have been able to genetically engineer bacteria that are able to diagnose a bleeding stomach.

The bacteria is in form of a chip, which contains sensors made from a living cell, which converts the bacteria response into a wireless signal, which is read through a smartphone.

MIT researchers have come up with a probiotic strain of E so that they are able to focus on the initial demonstration of bleeding which is happening at the GI. Devices such as Android app is able to evaluate the data efficiently. They have made the sensor in the form of a cylinder, and it is equipped with a battery that is 2.7 V that can be used on the device for 1.5 months.

Before releasing the sensor, MIT tested it using the pig to see if there is any blood that will be detected in the stomach. They have gotten funds from different countries that include Hong Kong Innovations, Texas Instruments, National Science Foundation, Office of Naval Research, Therapeutics and Centre of Microbiome Informatics and many others.

The researchers chose to adapt sensors from two different molecules, which were not yet tested.

One of the sensors was used to detect thiosulfate that is linked to inflammation that can be used to detect patients with Crohn’s disease or other diseases that are considered as inflammatory.

The other sensor detects AHL that is a molecule that signals the presence of bacteria. The researchers said that the sensors could be designed differently to detect different bacterial versions.

In an interview, Professor Timothy Lu said, “by combining engineering biological sensors together with low power wireless electronics, we can detect biological signals in the body and in near real-time, enabling new diagnostic capabilities for human health applications”

MIT will bring a new revolution in the health sectors with the innovation of these sensors. This technology is mostly designed for patient use, where MIT is working hard to ensure that they have reduced the size of the sensor. They are also studying on how the bacteria can continue surviving in the stomach.

The researchers have promised to work on finding other sensors that work for bleeding purposes. The doctors will not have to operate on patients to treat the GI problems.

The sensor will show how the food is pressing the stomach especially for patients with obesity. When one roll and swallow the sensor, the sensor adheres to the intestinal wall where the doctor will be able to see the digestive tract contractions.