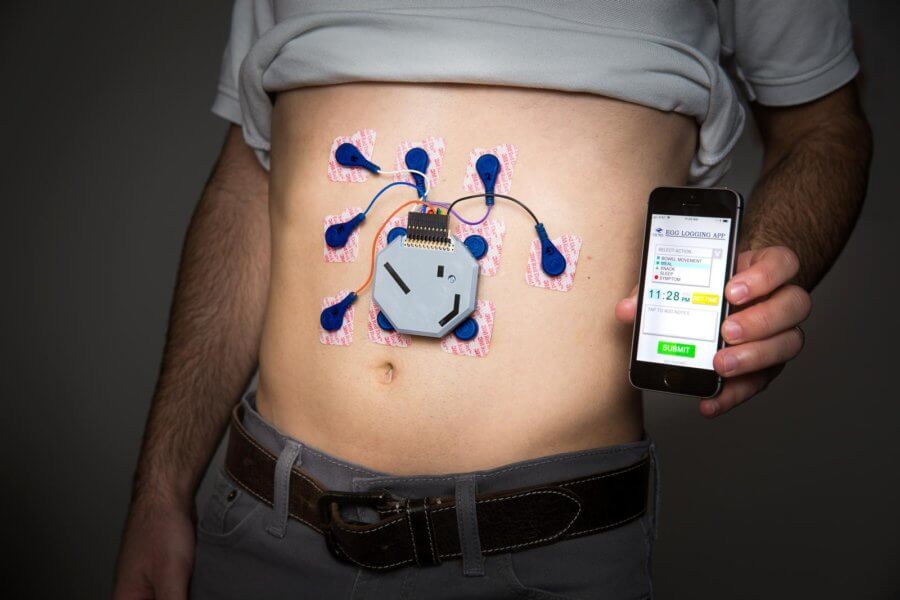 The American College of Gastroenterology reports that diseases of the gastrointestinal tract (GI) are notoriously difficult to diagnose. Some of the common symptoms of a disorder in the GI tract are heartburn, bloating, indigestion and constipation. One or more of these symptoms could be caused by disorders like IBS (Irritable bowel syndrome), GERD or acid reflux, peptic ulcer, etc. But often symptoms cannot be contributed to a particular symptom, and healthcare professionals can get the diagnosis wrong, even after running a variety of tests.

Such confusing symptoms can come from disorders like functional dyspepsia, which is a chronic disorder of the movement and sensation in the upper digestive tract. It is very common among the US population. Gastroparesis, a disease that stops the stomach muscles from working, is another common complaint with which patients come go to a GI specialist.

Researchers at the University of California San Diego have been working to develop a wearable device that will allow doctors to track GI activity even when the patient is no longer at the clinic.

The device by the GI Innovation Group will be able to track electrical activity in the stomach, in a way similar to an ECG for the heart.

The new device is made up of a box that has been 3D-printed to hold the battery and electronics, which are connected to ten electrodes. These electrodes are store-bought and the same kind used in ECG monitors. They are known to have some inconsistencies that come from measuring signals with a single channel. Signal errors also get in the way of accurate readings. But the developers of the GI monitoring device will use a multi-channel system and use different signal processing techniques to remove errors.

The wearable tracker will be able to eliminate the need for such invasive procedures or other diagnostic procedures that take time and cost money before a prognosis is possible.

The tracker has been tested on 11 children between the ages of 7 and 17, and an adult. The participants underwent an antroduodenal manometry procedure, where a catheter is placed in their nose to monitor pressure in the forestomach.

At the same time, they were plugged into the GI device. The results from the catheter and the device were close enough for scientists to see the device as a successful tool for clinicians for screening, diagnosis and refining treatment options.

The device works by monitoring the gastric slow wave, which is a wave generated in the stomach that travels down to the small intestine. The wave is responsible for peristalsis or contractions in the muscles, that break down food during digestion and carry it along the GI tract.

Studies have found that abnormalities in this slow wave are linked to functional dyspepsia, gastroparesis and chronic vomiting and nausea.

At the moment, the device is still being researched and needs more improvements. The team wants to bring it to the market for monitoring a variety of common and rare GI-related issues. It is looking at small business grants with this view.

The ECG device and smartphone app are one in a line of smart medical wearables that are changing the healthcare landscape. 3D printers have also helped manufacture a variety of medical devices like the silicon CPAP masks by Metamason that could save lives, or Organovo, which is printing human liver tissue models for testing.