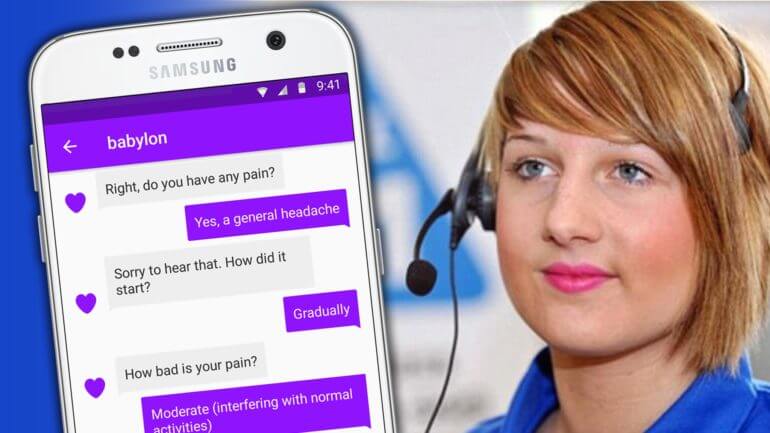 Tencent is collaborating with London based health app developer Babylon Health. Its AI chatbot will allow users to get a quick medical diagnosis with remediation tips based on the specified symptoms.

A chatbot is a popular computer program where people are able to send messages and make voice calls even on platforms like Facebook. It is also known as an interactive agent, chatterbot, talkbot or an IM bot. Chatbots are primarily used in dialogue systems that has information acquisition or customer service. WeChat is a Chinese app that enables one to communicate with friends and families from different countries through messages and calls. Tencent is an Internet provider in China, which was founded in the year 1998. The company has recently collaborated with Babylon to deliver chatbot services to WeChat users.

The partnership has come out well and the eHealth chatbot services will be rolled out soon on the platform. The users can be able to assess their health conditions with Artificial Intelligence.

Over the years, Tencent has been operational in China and has been able to build people’s confidence. They have also invested heavily in assets, other medical services such as We Doctor, which is also a Chinese healthcare provider. Chatbot gives personal assistant to people looking for health advice instead of going to see the doctor for consultation. This is based in a common place where you can call and get a solution for their medical problems.

Tencent has more than one billion users both for messaging and social networks. The partnership will enable them to send to symptoms to the Babylonian app, which at the end will send medical advice to the users.

They have also implemented this in Saudi Arabia where they collaborated with the Ministry of Health to lay a good foundation for the country.

The Babylonians have been able to sign up more than 1.4 million users who use videos to consult the doctor. The doctors offer free symptoms check-up services to the users. Many people who use this app are located in the UK, while others are in Rwanda and Republic of Ireland.

Ma Huateng who is the chairman and chief executive officer of Tencent , quoted that they are going to collaborate with government agencies in China to ensure that internet services are used to expand the health sector in China. Tencent holdings have built skyscrapers to make sure there are enough assets to implement the program. He further said, “We have Tencent Seafront towers which are the headquarter containing twin skyscrapers.”

Babylonians will benefit from this program, as it will enable them to learn innovative technologies in the field of healthcare.

It will also enable them to push symptoms of diseases such as hubris lower. China is working hard to expand this sector so that they can link doctors and patients, which has boosted the mHealth services.

The central government has worked hard to streamline this sector for a long time where they have seen that the country will be able to be on top till the year 2020. The Tencent company has acquired a lot of discipline and that means they will be able to work with the Chinese government which has highly regulated policy framework.