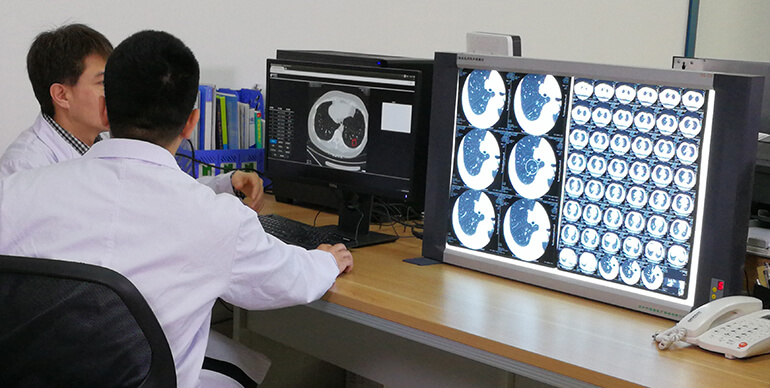 Diagnosing multiple chest conditions with only one chest CT scan is now going to be possible, thanks to InferVISION’s new AI-based technology called InferReadCT Chest scan. This tech works with the existing CT and can hugely reduce the manual workflow of a radiologist by helping in providing diagnoses more quickly and early during an emergency.

Then, it can let the radiologist know the location of the nodules along with other information like the volume, diameter, slice number of the nodule, size, location in the lung, etc. It also tells if the nodule could be cancerous or dangerous for the patient.

The InferRead process involves taking the images produced by the CT scanner using DICOM standards. It can also be connected to PACS (Picture Archiving and Communication Systems). Once all the images are processed, the InferRead interface displays the information at the radiologist’s workstation. This tool, according to Deng, needs to be considered as an aid in detecting nodules and not something that is able to replace the doctor. Its only point is to save the doctor’s time by bringing the most time-critical and important priorities to their attention.

Among other problems, InferRead can also detect a bone fracture, COPD (Chronic Obstructive Pulmonary Disease), and pulmonary artery calcification. The tech can detect multiple problems in a single scan, saving precious time. Other detectable problems include emphysema and other chronic lung diseases, bone tumour screenings, etc. The lung nodule screen has been enhanced this year to provide a full view of the nodule along with its density and volume. InferRead can also go through the case report bank and compare identical cases to provide more diagnostics.

A recent clinical trial was held to demonstrate the effectiveness of the AI-based diagnostic platform. Hundreds of CT scans were gathered and given to a group of radiologists to read manually in order to find nodules.

The same group was made to go through the scans a second time a month later with the help of InferRead CT Chest. It was found that with the help of the new tool, reading time was significantly decreased.

InferRead is still in its approval process in Europe and the United States. It is already in use in China at 250 locations and in about 30 trail locations in Europe, Japan, and the U.S. Infervision seems to be pushing the technology further with annual improvements. The company is known for creating products that are clinically valuable and can be used to make diagnosis more accurate and faster. The company has already secured $47 million in funding from investors in China.

It would be safe to say that InferRead and similar technologies cannot work on their own and always need some sort of human intervention or supervision. They are meant to be virtual assistants to the doctors and not replacements for them, although that future is not far away.