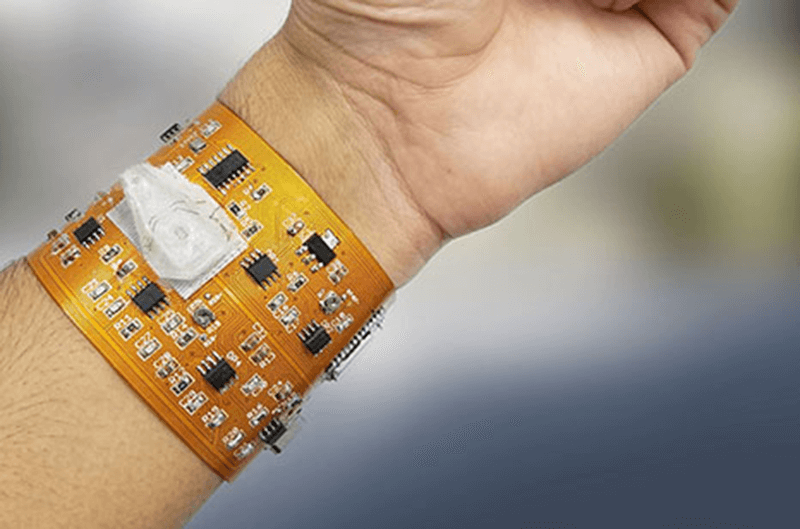 The recently launches new circuit wristband which with the help of biosensors will track the blood cells count of the user and send it to the smartphone via Bluetooth.

Researchers of the Rutgers University developed a new wearable device by which one can check the count of blood cells and detect and treat diseases.

The technology has already integrated with many wearables like smartwatches and smart glasses likewise. The objective is to make an efficient use of such gadgets in order to get health benefits and insights. The engineers and researchers at the Rutgers-University-New Brunswick came up with a new innovative, smart wristband.

A broad and flexible piece of circuit board that has gold electrodes on the surface. Even though it is not a real gold, it gives the look of the golden band which has black stones on it. This band will work with the help of a wireless connection to the smartphones. A Biosensor technology is used in the band for supervising the personal health conditions.

The data of the user’s health is transferred to the smartphone for a better understanding of the health conditions. Doctors can receive information through smartphones via Bluetooth. This technology can also be used for keeping an eye on the heart rate and other physical activities.

The wristband’s prime objective is to identify the blood cell count and other bacteria or particles in the air.

There are a number of wearables introduced in the past few years, which only have the capability to measure physical health conditions like the heart rate or the step count. This wristband will supervise the counts of red blood cells, white blood cells etc. The biosensors in the band will help in counting the particles.

It has a microneedle which will be used for collecting samples. The users have to take their blood sample and put it into the device. There are few microchambers given for the device to get a sample and provide details of the user’s blood cell count by sending the data or information to the smartphone. The electrical signals and the microcontroller will send the data in the form of digital language i.e. binary format (0 or 1).

The device will get the samples and will help in the diagnosis of blood-related diseases such as the low count of red blood cells or the indications of any kind of internal bleeding. This is actually a significant use of this band as it will help in detecting haemorrhage and lives can be saved. It will also help in detecting the count of white blood cells whether it is low or high. If anything abnormal is detected, the device will send the insights to the smartphone.

Generally, the abnormally high blood count or low blood count of the white blood cells is the indication of leukaemia, which is a type of cancer.

This wristband will skip the use of a conventional lab-based method that takes hours to provide a report on blood conditions. Rather it will give quick results for the blood test at any place, whether it is office or hospital.

With this technology and device, the health conditions of users will be in their hand, and they can carry forward their daily routine to improve their lifestyle. However, there is always a habit in the field of science and technology, to get a more advanced version of any device.

Sooner or later, the next-generation wearable will be used to detect many other medical conditions. This wristband is itself not just good for the humans but it will also provide a better scenario of the dust particles in the air. It will help in controlling the environmental degradation. It is one of the best inventions so far.