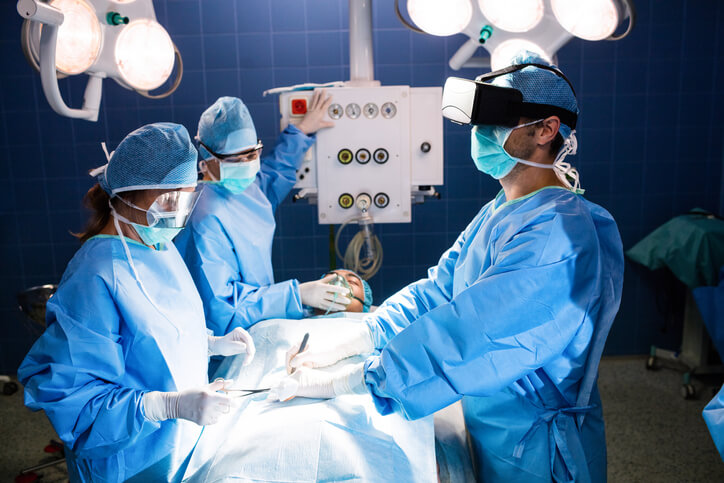 The healthcare industry has been slowly digitizing for years in the form of digital patient records, but a new wave has begun to crest that brings forth an exciting new frontier. Patients will no longer be burdened by travelling while they are sick or meeting with doctors regularly for follow up appointments by way of Telemedicine and can eventually look forward to continuous monitoring and dosing devices that will make treatment of chronic illnesses more manageable through wearable devices.

Hospitals and healthcare providers will also save time and money in the long run, with an estimated $300 billion in savings predicted.

Additionally, the endless streams of data collected from wearable technology can be used to better understand health trends and bring more transparency to the efficiency and effectiveness of medicinal practices.

The benefits are boundless, and the possibilities endless. For those who are new to the newly digitized healthcare scene, it can appear confusing and overwhelming, but once these are widely implemented one would wonder how we survived without these advancements.

Individual doctors have been impacted by these changes in a number of ways. Independent, privately practising doctors have been feeling strained by the new technology slowly taking over in patient care, causing a shortage of privately practising doctors. Telemedicine is creating new jobs to counteract this, hiring nurses and doctors specifically to do exams over the internet.

Patient care as a whole is expected to reach new heights, with a marked decrease in the time it takes to reach a doctor and the ability to receive lab results in a much quicker and simpler manner through patient portals, creating a sense of newfound control for patients.

“Smart” or digitalized hospitals have been making an appearance lately, with prime examples being the AMITA Health Cancer Institute in Chicago, USA using DaVinci surgical robots, the Apollo Hospital in New Delhi, India using the NovalisTx radiosurgery machine, the Asklepios Clinic in Hamburg-St. Georg in Germany that has made medical history by performing surgery on a liver guided by an iPad, and the Sheba Medical Center in Israel providing victims of terror and injured soldiers with the opportunity to rehabilitate more quickly with their state of the art Virtual Reality Training Facility. These hospitals offer the cutting-edge technology and continue to drive the digitization process.

Digital solutions being used by the hospitals

While much of the new technology the medical field is anticipating is still in the clinical trial phase, some is already in hospitals making staff and patients’ lives easier on a daily basis. The most notable advancements are in telemedicine and in robotics.

As shown below, a high percentage of doctors have begun to rely on digital sources to organize and utilize information, making the process much quicker for physicians and nurses and also allowing more transparency between the patient and the health care provider.

While less than half of US doctors report routinely accessing clinical data outside their organization, more than half rely on online processing to prescribe, file patient information and receive results. This is loosely regarded to as telemedicine, using online interfaces and databases to communicate with patients or complete a medical procedure. 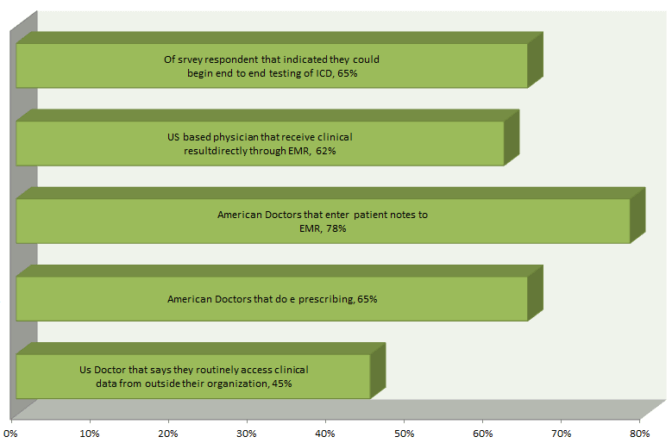 Digital technological solutions in hospitals may seem small, but the impact they have on the overall healthcare practice is immense. These measures save time, money, and patients live by making hospital procedures easier and more efficient.

Germany has been a forerunner in the telemedicine scene, having a countrywide telemedicine portal that is making innovative new projects and even has an award dedicated just to advancements in telemedicine, the Telemedicine Prize. Germany’s Federal Ministry of Health is responsible for the German Telemedicine Portal, an all-encompassing plan that connects and assists hospitals with their telemedicine initiatives.

One such initiative is the Tele-Stroke Unit, which allows all hospitals without a neurological ward to treat stroke patients, which was impossible before the unit was launched. Therefore, patients in rural areas no longer need to drive hours to reach a hospital in a more populated area, which leads to many casualties and unnecessary complications.

Not all of the advancements are so widespread but are currently limited to only a few hospitals in the world. A prime example is the Apollo Hospital in New Delhi, India.

Along with many other cutting-edge advancements, they have installed a NovalisTx radiosurgery machine, which delivers carefully measured doses of radiation to tumours.

What makes this machine so special is that it conforms to the exact shape of the tumour, minimizing or even eliminating damage to surrounding healthy tissue. There are very few of these in the world and it has been shown to decrease the amount of radiation needed for patients long term, saving the patient time and money and delivering a more efficient treatment.

The United States is of course not left in the dust, with many hospitals obtaining DaVinci surgery robots. Most notable is the AMITA Health Cancer Institute that boasts the most up to date DaVinci robot, the DaVinci Xi device. This exceptional robot performs minimally invasive procedures that would be impossible without it, with an unsurpassed range of motion and monitoring processes.

Finally, Israel’s largest hospital, the Sheba Medical Center has made multiple contributions to the rehabilitation and recovery of patients who have lost limbs, but possibly the most exciting of these is the Virtual Reality Training Center.

Patients have the opportunity to cope and process the loss of their limbs in a way they never have before, engaged in a virtual reality world that allows them to encounter everyday situations with their prosthetic before they actually experience them in the outside world. In this way, they are not endangered by their limited mobility and can learn to navigate these situations in total safety, allowing for a much quicker rehabilitation.

Not all of the advancements are working with patients directly. The Xenex Pulsed ultraviolet light disinfection robot has revolutionized hospital hygiene, using UV light to eliminate 99.9% of germs in hospital rooms.

This portable robot has shown to decrease the number of superbugs and healthcare-associated infections by 50-100% depending on the hospital, which greatly increases the safety of patients staying in hospitals. This robot is slowly being implemented worldwide and is expected to decrease antibiotic-resistant superbugs by a significant percentage in all hospitals it is used in.

There are pros and cons to the new and improved technological medical scene, but the biggest pro is certainly the efficiency and accessibility offered to patients. Thanks to physicians and hospitals now storing their medical records on a cloud, patients can simply go online to find out test results instead of attempting to reach the physician by phone, which proved to be difficult in many cases.

Exams can be done through smartphones and computers via video chat, removing the obstacle of transportation for very sick or busy patients and also saving them quite a bit on their medical bills, as video chatting with a nurse or doctor is significantly cheaper than an appointment. And of course, there is a significant improvement for those suffering from cancer with the new robotic surgery and radiosurgery technology making more of an appearance, and for those who have lost limbs with robotic prosthetics and new rehabilitation techniques.

Patient care is more advanced than it ever has been. As shown in the graph below, the increase in patients using these methods or planning to in the future is soaring, and not just including those in the younger age groups. 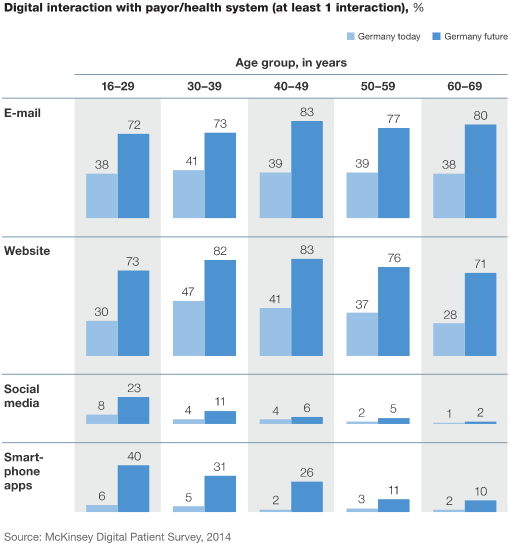 However, some worry that the human touch is being phased out of medicine. With almost every face to face interaction slowly being replaced by screens and technology, there’s hardly any personal touch involved in medicine. Independent physicians are dropping like flies, with an expected shortage of 90,000 doctors by 2025 according to Converge Technology.

With these losses, independent practising could be left behind completely in our medical system. There is also a concern about cyber-security, with the black market value of medical records being quite high. Electronic Healthcare Records (EHR) is a national effort to computerize all patient records under one system, and more than one facility using EHR has experienced a failure in the system.

Those who are against the digitization of hospitals are usually fearful of such instances, where the security of the individual’s records could become compromised and patient care is affected due to not being able to access records.

Such instances will hopefully be phased out in the future, but for now many are cautious at the thought of all their information being online.

Despite the drawbacks, most medical facilities are moving forward into the digital age with excitement, believing the benefits far outweigh the negatives. In the next few years, we will be seeing more advancements in these areas, with new technologies still to be developed.