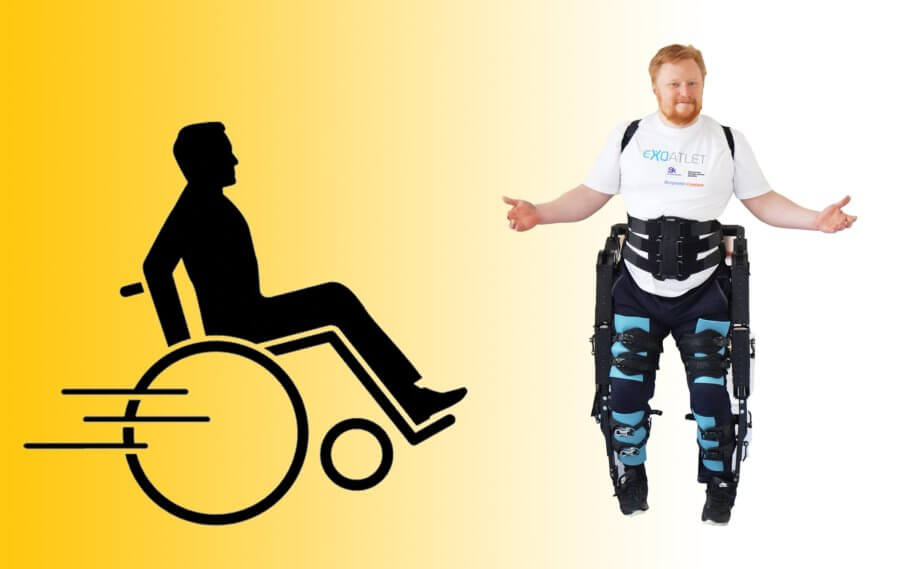 Wearable robots are machines with telepresence and they are developed with the intention to suit the shape and function of the human body. The robots are meant to enhance body movements. The robots utilize transducers to get strength and speed from the movements of human beings. They also depend on motion effects such as sights, sounds, and the tactile effect. The wearable robots highly depend on the speed and the strength in the person that controls them.

There are different types of wearable robots. They vary according to the purpose of application or acquisition of the robots. An example of a wearable robot is the Hybrid Assisted Limb. This is mostly used to enhance the strength of the hands for individuals handling heavy loads, hence enhanced stamina to handle the pressure that comes with hauling weighty materials.

Other similar wearable robots are used by paraplegic individuals to help them in walking.

Soft exosuits form the other wearable robots used in strengthening soft areas such as ankles and hips. In addition, there are exoskeletons that are worn on to stabilize a person for whole body movement.

The application of wearable has been notable in the military context. The army has been using the wearable robots when carrying heavy equipment over a long distance. These robots have also been applied in technical rescue operations of victims from tasking situations. Some high profile fitness centres also utilize the wearable robots during training of their customers.

In healthcare, the use of wearable robots is helping the paralytic individuals in the movement. It is a more stable way of walking compared to the use of crutches or walkers.

As of 2015, the main producers of exoskeletons were Lockheed Martin, Ekso Bionics and Panasonic. However, other companies came into the picture with over 10 new startups realized in 2016. Some of these startups include the Exhauss, SuitX, Innphys, BIoservo, Hyundai, StrongArm Technologies, Cyberdyne and Laevo among others.

The production of wearable robots for the medical field is taking shape with the realization of disruptive technology that is helping derive better tools to assist in physiotherapy. Moreover, technology firms are focusing on the integration of machine learning processes into the wearable robots for easier monitoring of patient mobility improvements.

Some of the globally renowned organizations transforming the medical field with robotic inventions include:

1. NCCR Robotics: The company is a world leader in developing incredible wearable robots that perform as assistive aids. These robots can be further trained to be used in physiotherapy sessions as a trainer or a therapist. Moreover, the robots can be excellently trained for helping paralysed people in daily routine and lifestyle.

2. Rewalk: A key producer of exoskeletons supporting the hip and knee mobility. Prevents spinal cord Injury as one stands upright and can make various movements in different terrains.

3. Hyundai: The incredible automobile company is now planning new possibilities in the healthcare sector by introducing wearable robot assistants. The company is focusing on roboto-exoskeleton devices that can help or augment with the mobility of the wearer. It serves medically, by assisting the people to wear it for moving around independently. People who cannot easily walk around or have difficulty performing tasks can also take help of the wearable robots.

4. Ekso Bionics: Focuses on patient mobility enhancement. The wearable tools are meant for amplification of the patient’s rehabilitation.

The organizations face varied challenges but a commonplace challenge is an adoption in some markets. The regulatory sensitive industry hampers immediate adoption of technology that is meant for handling the various operations in medical practice.

It is expected that with globalization, the medical technology will be swiftly distributed to the various markets. Moreover, in terms of pricing, medical inventions are realized with great research and the inputs will reflect on the ultimate price applied to the products. However, the utility of such product bears commensurate value to the users.

Wearable robots: The next big thing in robotics

The technology behind the wearable robots is of a fictional background. As indicated, the technology arose from the fictional superman by Marvel Comics back in 1961. This has been transformative with the inclusion of research and development leading to the establishment of robotic gadgets for use in various industries. This has as well been made great by the adoption of smart gadgets into the daily operations of many industries.

The exoskeleton market has been advancing at a fast rate and there is increased use of the technology in the therapy of patients that are suffering from musculoskeletal and neurological disorders.

In 2016, the industry of exoskeletons made over $16 billion US Dollars. Of the overall exoskeleton market, the healthcare sector accounted for 41%. There is development in the adopted forms of the technologies including soft actuators, 3D printed exoskeleton and application of Li-ion Batteries which are enhancing the technology.

The wearable robots are proving helpful to the healthcare sector with the development of passive exoskeletons for application in back support, skiing, arm support, upper body rehabilitation and the legs support. This is transforming the physiotherapy and mobility reforms for the sector.